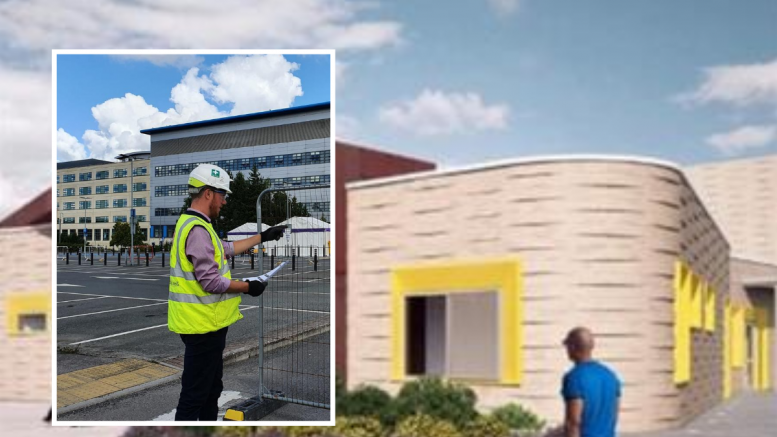 The long hoped-for unit will be built in the grounds of the hospital’s Marlborough Road site. A picture shared on the hospital’s social media pages today show worker wearing a hi-vis tabard and hard hat on the car park behind the main GWH building.

And hospital bosses thanked all those who donated to a £2.9m appeal launched by GWH charity Brighter Futures. The cash will help to fit out the new unit, which is not expected to open for some time.

Kevin McNamara, Chief Executive, Great Western Hospitals NHS Foundation Trust, said: “This project was made possible thanks to the £2.9 million raised by Brighter Futures’ Radiotherapy Appeal, through the generous donations and fundraising efforts of local people.

“After years of campaigning and fundraising, we are eternally grateful for all the support we have received to help make this this happen.

“Bringing radiotherapy to Swindon will make a huge difference to the lives of hundreds of local families and we are all so pleased to see building work finally start.

“The Swindon Radiotherapy Centre will be an incredible legacy of the community spirit of Swindon and the surrounding communities.”

The radiotherapy unit, which is being overseen and run by Oxford University Hospitals NHS Trust, has been years in the making.

Last June, it was announced OUH was getting a £15.9m loan to build the unit.

Ministers had given the green light for the capital loan at the start of the year, but took more than six months for OUH to get final approval for the cash.

The project had been delayed because of financial problems at OUH. In 2018, the Adver revealed that the trust had initially hoped to finance the scheme through its own reserves – but changes to its financial situation had forced them to borrow the money.

Nerissa Vaughan, chief executive of GWH, told the hospital’s annual members meeting last autumn: “When we had the business case signed off for the radiotherapy services, OUH was still in a surplus. They had quite big capital reserves they were going to draw on.

“Since then, they’ve moved into quite significant difficulty. They’re going to have to borrow [the money] from the department of health to build the facility.”

At the time, OUH’s radiotherapy chief Dr Hobbs said she hoped construction to start in spring 2019, with patients beginning to be treated in Swindon from 2020.

Farmer James Hussey, who lost his wife Gill to breast cancer six years ago, has regularly held fundraising events on his land. Currently, one of his fields near the Ridgeway is home to a large crop circle, with the profits from those paying to visit the circle donated to the GWH charity.

He told the Adver he was “over the moon and a bit overwhelmed” by news that construction had begun. “It’s amazingly exciting and I think with Covid we were expecting there to be more complications. I’m just bowled over.”

“It’s been frustrating there have been some delays in getting it underway, particularly because we know some of our members have had to have treatment and have had this quite inconvenient journey to Oxford.

The Rotary clubs have raised hundreds of thousands of pounds for Brighter Futures. It was a £175,000 grant from the clubs that carried the appeal over the line shortly before Christmas 2018.