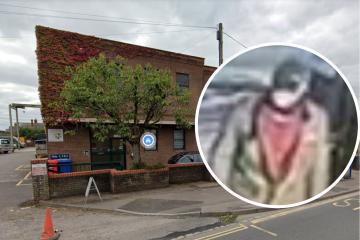 THE hunt is on for a suspect who attempted to burgle a Wiltshire auction house in broad daylight.

A man attempted to break into the store in the Bath Road Business Centre in Devizes, on December 23, 2022, just before 11am.

He caused damage to the door while trying to force his way in, but left the scene after failing to gain entry to the premises.

The police have now released a CCTV image of a man who they are attempting to identify in connection with the failed break-in.

The police are looking to speak to this man. (Image: Wiltshire Police)

They have urged anyone who may recognise the man, or have information about the incident, to contact them.

A spokesperson said: “We are trying to identify a man in connection with an attempted burglary at an auction house in Devizes. The incident happened at approximately 10.40am on December 23.

“A man attempted to gain entry to the store in Bath Road Business Centre before causing damage to the door and then leaving without successfully gaining entry.

“CCTV of a man we would like to speak to is attached. Anyone with information should call 101 and quote crime reference number 54220134292.”