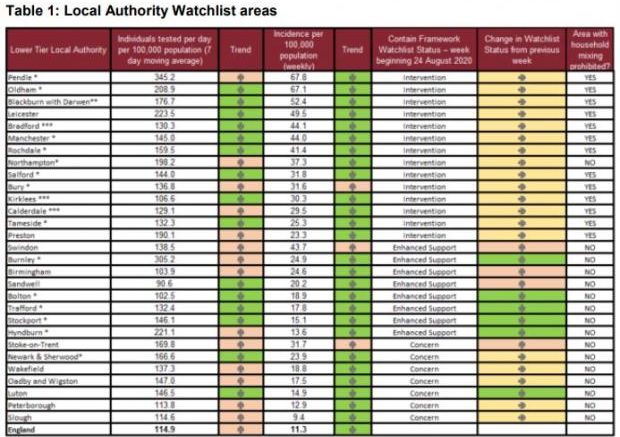 Swindon could be one step closer to a local lockdown – after government health chiefs upgraded the town from an “area of concern” to one requiring “enhanced support”.

The change came as Public Health England published its latest coronavirus watchlist. Swindon first appeared on the list on August 7 as an area of concern – but is now one of eight areas where the government is giving extra support.

Despite the change in the town’s place on the watchlist, council health officials played down the risk of the town heading for local lockdown – and said coronavirus case rates are actually falling.

Swindon Borough Council’s director of public health Steve Maddern said: “Although it’s the next step on the ladder on the area of concern list, it’s important to recognise that we’re not putting in any new requirements.

“There are no local restrictions or lockdown measures being put in place or being imposed upon Swindon.

“I have not requested that and they have not been asked of us.”

Mr Maddern said the council could now get access to additional support from the government, if needed. So far, health officials have only sought reassurances that test centres at the Wroughton Park and Ride and County Ground car parks will continue to operate.

Since mid-August the pop-up test centre at the County Ground has conducted 3,000 coronavirus tests, with around two to 4.5 per cent of people testing positive. He said the town centre testing site was currently due to stop operating next Friday, although the situation was being reviewed on September 2.

What is an area of enhanced support? Why is Swindon moving up the ladder?

There are three categories on the watchlist: intervention, enhanced support and area of concern.

Of 29 local authorities that feature on the list, seven are areas of concern – where the government is worried about rising case rates.

Eight – including Swindon – are being given enhanced support.

And the government’s intervening in 14 areas. They included towns like Manchester, that have been placed on local lockdowns (although the lockdown is to be lifted in Greater Manchester). 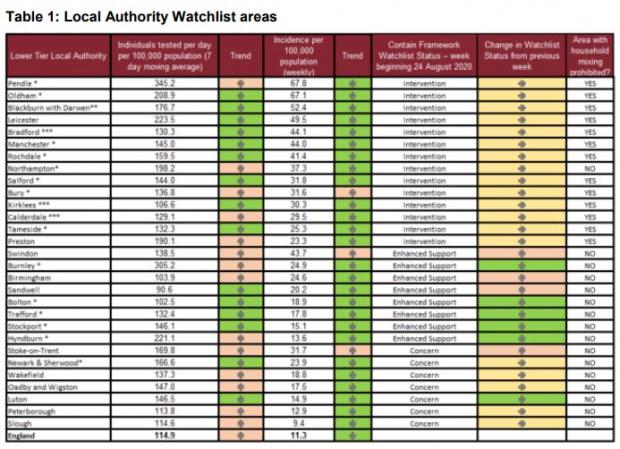 Mr Maddern said there were three reasons why Swindon had moved another rung up the ladder.

First, although the case rates have fallen over the past month, the town’s rate is still relatively high compared to other areas. That could change over the next week; the data Public Health England bases the watchlist on is roughly a week old – and the very latest figures show the equivalent of 36.5 new cases per 100,000 people.

Second, Swindon’s now on a par with other areas that have been given enhanced support. “From the government perspective in a bid to be transparent it’s very hard to argue why Swindon would be lower on the list but with a higher case rate,” Mr Maddern said.

Third, the town’s seen a number of workplace outbreaks – with at least 16 workers at B&Q testing positive for the virus in the past fortnight. But while the outbreaks have been high profile, officials say those who are testing positive have probably caught the virus outside of work, for example from family members or by sharing a lift on the way into work.

How many people have tested positive for coronavirus in Swindon?

The latest figures show that, as of 9am on Thursday, August 27, there had been 1,234 confirmed cases in Swindon since the pandemic began. That was around 60 more than the same time last week.

The latest watchlist puts the rate of new cases at 43.7 per 100,000 people (the highest case rate among the eight areas where the government is giving advanced support). However, the council has pointed out there’s a lag on the data, claiming the very latest figure is 36.5 new cases per 100,000 people.

Many of those cases are concentrated on the SN1 postcode area and, in particular, on Broadgreen. Around half of those testing positive have been from black, Asian and ethnic minority communities.

What can I do to stop the spread?

The main thing is get tested if you feel you’ve got any coronavirus symptoms – however mild. You can book a test on the government website here.

If you’re worried you’ve got coronavirus or you’ve tested positive, it’s important you keep your distance from others in the home and that surfaces are washed down and you keep washing your hands.

Don’t go into work if you feel you have covid symptoms. 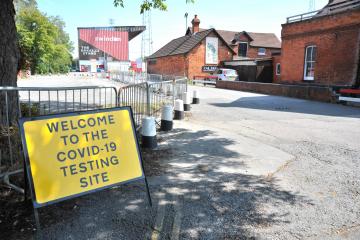