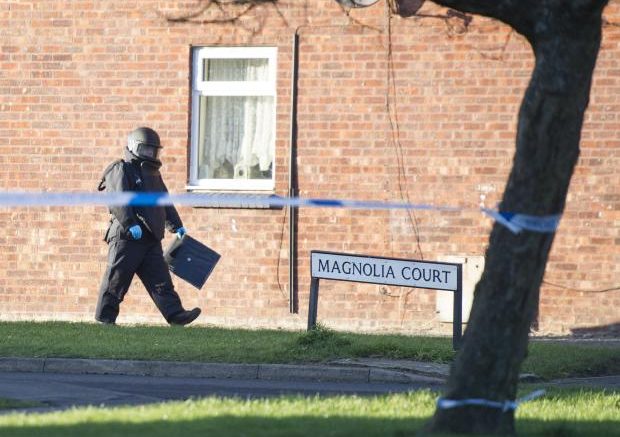 COUNTER-TERRORISM police and an army bomb squad was called to a Pinehurst street after a woman found what she feared was a bomb in a plastic Co-op bag.

The explosive device was, in fact, the result of ex Steven Beeton’s drunken experimentation. He gutted fireworks into a Henry vacuum cleaner tube in an effort to create a “big bang”.

But the 34-year-old scaffolder walked from Swindon Crown Court with a suspended sentence after a judge acknowledged the person he was likely to have done the most damage to was himself.

The court heard that counter-terrorism officers and a British Army bomb squad were called to Magnolia Court in Pinehurst on January 18, 2018, after a woman discovered what appeared to be a pipe bomb in a plastic bag at her home.

A metal tube from a Henry vacuum cleaner had been filled with powder from fireworks, crimped at one end and plugged with a firework at the other. A shotgun cartridge had been emptied of its powder and a single lead shot was found with the explosive mix, although it was recognised the shot may have found its way into the mix accidentally.

Gutted firework casings, powder and fuses were found in the plastic Co-op bag.

Surrounding homes had to be evacuated and police cordoned off the neighbouring streets while the bomb squad was called in.

Suspicion quickly fell on Beeton. A couple of days earlier the woman had been at work when she was tipped off by Beeton’s mum that her ex was at the house drinking. She went home with a friend but, when she saw the man banging on a window, was too scared to go in.

Later, she found scorch marks in the kitchen and garden – but it wasn’t until several days later she discovered the carrier bag containing the makeshift explosive.

It emerged he had found a cache of fireworks in the house and – drunk – had spent some time firing them into the garden. Some had misfired and gone into the house.

His barrister, David Maunder, said the man had begun creating the vacuum cleaner-based device in an effort to create a “bigger bang”. But he was interrupted when police were called in by his partner and he hid his drunken experiment in a cupboard.

He had not been trying to create a pipe bomb, as had originally been alleged in the charge brought by the Crown. He had not intended to harm his former partner, but admitted being reckless about whether life or property was endangered.

Acknowledging his client had been “foolish”, Mr Maunder said: “The worst damage he is likely to have done is probably to himself.”

The barrister said his client had cut down on his alcohol intake. He was in a new relationship. The qualified scaffolder had struggled to find work since the incident.

Handing Beeton a 10-month jail sentence suspended for two years, Judge Peter Crabtree said: “This is a very unusual case. The explosive device you were creating was intended to create a loud bang.

“I accept aside from yourself the prospect of injury was not great. Moreover, you had not completed the device. The level of overall culpability and harm is not significantly above the bottom end of the scale.”

He said the discovery of the explosives had frightened Beeton’s ex.

“When she found the items in the plastic bag she was genuinely terrified,” he said.

Under the terms of his suspended sentence, Beeton must complete the building better relationships programme and five rehabilitation days.

A five-year restraining order prevents him from contacting his ex.