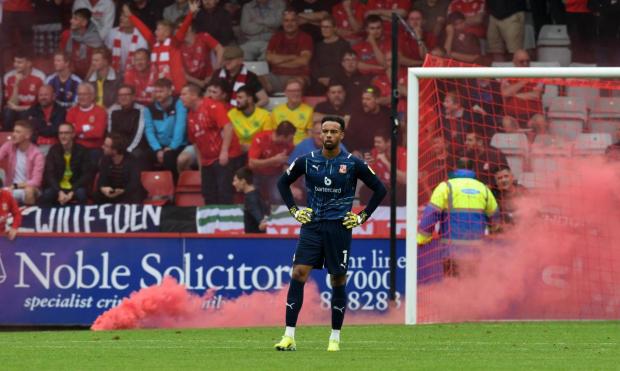 A SWINDON fan has been banned from attending his club’s games after he threw several bins towards the pitch.

Sidney Stott was involved in crowd trouble when the Robins travelled to Stevenage last September.

He ran onto the pitch and also threw “several bins” at or towards an area adjacent to the pitch.

In the incident at the Lamex Stadium towards the end of the 1-1 game, chairs were broken and thrown onto the pitch and flares were also let off.

Advertising boards and signs were ripped off when the small section of away fans appeared to clash with stewards in the final five minutes.

Flares were let off behind Jojo Wollacott’s goal.

Now, 29-year-old Stott has been fined and banned from attending Swindon or England matches.

In the hearing at Stevenage Magistrates’ Court in April, Stott pleaded guilty to going onto the playing area at a football match and throwing a missile at area adjacent to the pitch.

Both are crimes according to the Football (Offences) Act 1991.

Court registers show that Stott, from Locksbridge Road in Andover, entered the playing area without lawful excuse in the match held on September 4, 2021.

It also shows he threw several bins at or towards an area adjacent to the playing area which spectators were not generally admitted.

During the hearing, Stott was fined £500.

Debris near the away end at the end of the game

He was also ordered to pay £85 in costs and a £34 victim surcharge.

Magistrates further banned him from attending Swindon or England games for three years.

The football banning order ordered that he must not enter an area around the County Ground in Swindon for a period beginning three hours prior to kick-off, during the game, and two hours after full-time on a home matchday.

For Swindon away games, or England matches, he must also not travel within four miles of any stadium in which those teams are playing.

In a statement at the time, Swindon owner Clem Morfuni and Rob Angus said: “We were very disappointed by the events that unfolded in the away end towards the end of the game this afternoon.

“While we are incredibly grateful for the large following we have away from home, the events that took place today are unacceptable and cannot happen again.

“Due to the damage that was done to the away end, the club could now face further action from the EFL for this.

“We urge all of our fans to treat visiting stewards, officials and property with the utmost respect at all times.”