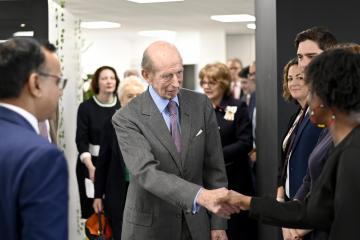 A ROBOT greeted a member of the Royal Family during a visit to a tech-focused business that is preparing us for the future.

HRH The Duke of Kent was once the president of the BCS Chartered Institute for IT and then went on to be its patron for more than 40 years.

Prince Edward paid a visit to its new offices in the town centre on Wednesday, after its staff settled in in 2020 after moving out of the old base in North Star.

Upon his arrival, His Royal Highness was greeted by CEO Rashik Parmar MBE – who spoke through the screen and speakers on a two-wheeled ‘tele-presence’ robot controlled by the boss from the other side of the office.

HRH The Duke of Kent listens to presentations from apprentices (Image: Dave Cox)

Both were impressed by presentations from senior figures at BCS who spoke about how they had played a key role in the new curriculum which teaches computing to all children over the age of five.

HRH said: “It’s very impressive – virtually every school now has someone able to teach this when there were very few not long ago. It’s moving so fast.”

The cousin of Her Late Majesty Queen Elizabeth II also heard about how more than 1,000 community volunteers arrange events to help people better understand tech, and the Coding Black Females initiative which aims to address the lack of black women working in the IT industry.

Prince Edward received a framed photo of an archive issue of the IT Now magazine from 1979, which had the then-president on its front cover.

Mr Parmar said: “HRH The Duke of Kent has been a long-standing friend and supporter of the power of information technology, watching it transform from a niche interest to something woven into very part of our lives.

“We were delighted to welcome him to our offices, and to restate our message that an ethical, accountable and inclusive IT profession benefits everyone.”

Established in 1957, BCS was granted a royal charter by the Privy Council in 1984 which defines its role in maintaining standards of competence, conduct and ethical practice within the IT profession.

It represents 60,000 members, promotes advice on government policies about computing and the internet, and carries out the most digital apprenticeships of any company in the UK (4,500 a year).

Dame Stephanie Shirley CH is a global IT entrepreneur and philanthropist. She said: “It has been an honour to welcome The Duke of Kent today to BCS.

“Having spent the best part of seven decades in our industry, I have seen a great deal of positive change. Women are now playing a vital role in all aspects of tech and are making their way in this sector.

“However, women are still under-represented, and more needs to be done to attract and retain them in this fast-growing sector. We’re grateful that the Duke continues to support BCS and our work to create a diverse and exciting IT profession.”

The institute’s managing director Holly Porter said: “I was quite nervous before my presentation, but it went well.

“His Royal Highness has been part of our organisation and our heritage for so long, and having a royal patron and charter is so important for our members to give us credibility around the qualifications we have, so to have him come to our offices meant a lot to the staff.

“We convene different people through partnerships and in government, and give our members the opportunity to share their views as well when there is a key question.”

Before this visit, the Duke visited the Steam Museum.