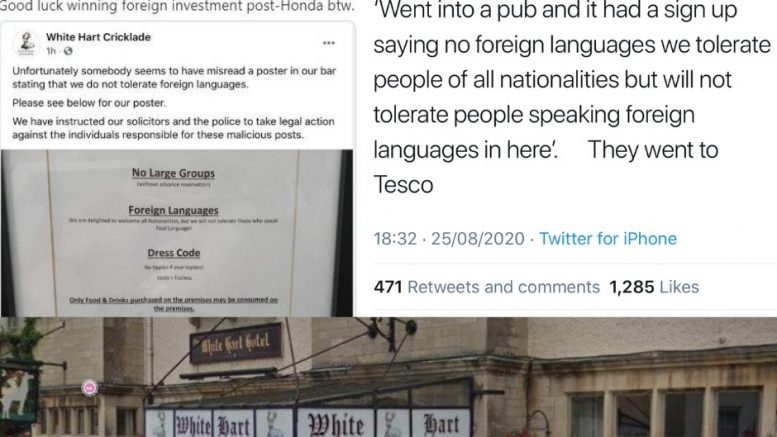 A PUB sign banning foul language sparked an online race row after it was misread by a drinker.

The controversy started after a customer misinterpreted a line about foul language on the poster outside the White Hart in Cricklade.

It read: “Foreign Languages. We are delighted to welcome all nationalities, but we will not tolerate those who speak foul language.”

But the customer mistook the word ‘foul’ for ‘foreign’. This was then tweeted and caused an uproar on social media.

The tweet was later deleted. Despite this, people have still taken issue with the sign’s wording.

One user said: “So if I visit Wiltshire and bring friends from Italy, are they allowed to speak to each other in Italian anywhere in the county or is it just the White Hart in Cricklade where it’s considered ‘foul language’?”

Pub manager, John Flynn, denied racism and said the sign has been misinterpreted.

He said: “The notice was put up with the intention stating that we had a problem in the bar with people using foul language and we were getting comments from our customers saying they didn’t like it.

“So we put the notice up, so that if they did use bad language we could ask them to stop. That was the whole intention.”

Mr Flynn said asking people not to use bad language is common in most places such as pubs and restaurants.

He added: “If the terminology of the sign is offensive to people then we’re sorry for that.

“But we can’t help that people have taken this out of all context.

“We’re not racist, there’s nothing to even suggest racism in that, in fact the opposite is said because we say we welcome all nationalities.”

He believes the social media storm has had no impact on his business and that most have been coming to his defence.

Mr Flynn is a self-employed tenant licensee at the pub from Arkell’s and managing director George Arkell said: “John is a fantastic, long-serving tenant licensee of ours and has always been a colourful character.

“Sadly it looks like someone initially misread the full sentence on the sign and misinterpreted the meaning. John says all foreign languages are welcome, but he will not tolerate foul language.”