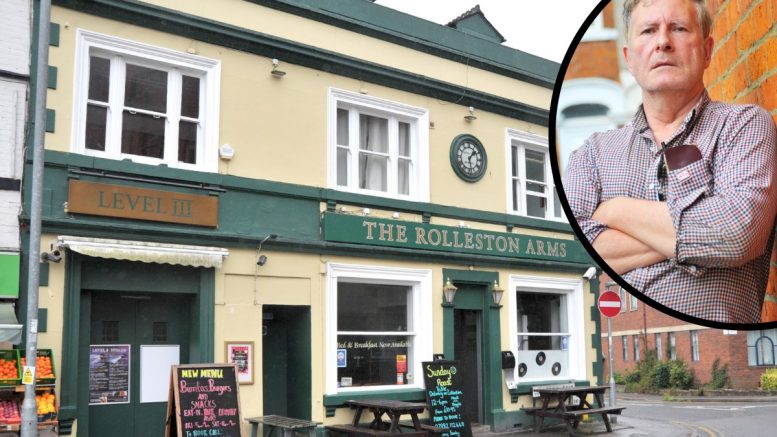 AN annoyed pensioner wants action after he tripped over a pub bench and fell into the road.

Graham Woodward was walking to the town centre when he took a tumble outside the Rolleston Arms in Commercial Road.

He has suffered with hip pain ever since – which has stopped him from going on his daily walk – and says matters could have been much worse.

The 66-year-old said: “If a car was driving on the road it would have gone straight over me.

“I’m getting on a bit. I’m almost 67 and I don’t know what I’ve done to my hip but I don’t want to go into the doctors or Great Western Hospital because I’m scared of Covid.”

A man and a woman who saw the whole thing happen rushed to help Graham, who lives in Nelson Street, out of the road.

“The young man from the fruit shop next door was so very kind to me and offered to get me a chair and a glass of water, ” he said.

“Also another lady who was passing asked if I was alright and helped my wife Shirley.

“I’m quite angry at the whole situation, the bench is right on the corner and is dangerous.

“I can’t walk anywhere that’s a great distance because of my hip hurting, which is annoying because me and my wife love to go on walks.”

Graham wants the council to step in and order the pub to remove its outdoor furniture – but the local authority says it does not have the power to do so.

“There’s no real defined boundary on what part of the pavement is council and what is the pub’s, it’s just too dangerous,” said Graham.

When Graham’s claims were put to the manager of the Rolleston Arms Violet McLaren, she said: “We do have a licence to put furniture outside the pub. I think he has misunderstood that.

“The furniture doesn’t obstruct the pavement, there’s plenty of room, so I don’t know how he didn’t see it.

“The benches have been outside the Rolleston for years.”

Graham has made a complaint to the borough council about the lack of action to remove the benches from outside the pub.

But a spokesman the council said: “The land directly in front of the Rolleston Arms is not public highway where the seating is provided outside so does not require a highway pavement licence.”