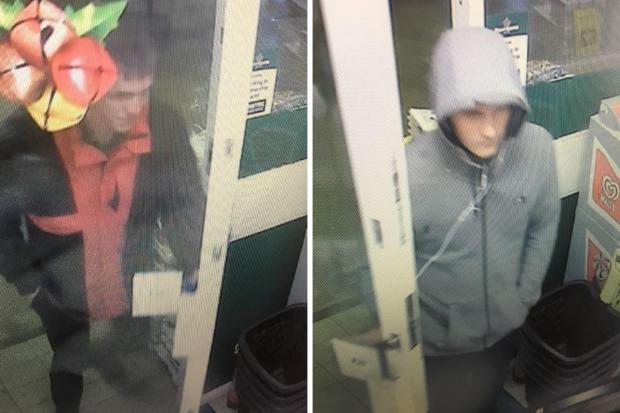 A man who robbed a garage at the point of a broken beer bottle then bought a round of drinks with the proceeds has been jailed for three years.

Four months after he robbed the Esso garage on London Road, Devizes, Lewis Frost – who was in the midst of a mental health crisis – sliced, kicked and spat at police officers trying to help him.

Swindon Crown Court heard the 26-year-old was drunk when he and a friend went to the service station at around 2.30am on December 21 last year.

Frost, who had armed himself with a broken beer bottle, pushed the shop assistant behind the counter, held the bottle up to the man’s head and demanded cash. He stole £230 in coins and notes from one of the tills. The shop assistant was uninjured but shaken.

Later that day, the man who had stayed at the entrance to the shop confessed his part in the robbery to his uncle. Frost, who had gone to Chippenham and bought a round of drinks with the proceeds of his crime, was persuaded to hand himself in by friends who had spotted a police appeal about the incident. He was released then later charged and bailed by the police.

Police issued these two CCTV images in the wake of the Esso robbery Picture: WILTSHIRE POLICE

On April 14, Frost drove to Avebury having bought a bottle of rum. He intended to take his own life. After he parked up he texted friends before throwing his phone into the undergrowth.

He was stood in the A4361 trying to flag down drivers to help him look for his phone when he stepped out in front of a minibus carrying members of Wiltshire Police staff on their way to Gablecross police station.

When he heard one of staff members mention that police officers were on their way he ran off down the road. The minibus passengers – among them special constables – gave chase and managed to bring him to the ground. One of them, Michael Turner, was kicked in the face in the struggle.

PC Steele arrived with a colleague and asked Frost to remove his hands from his pockets. When he took them out his jacket the officer saw he had a razor blade in one hand, which the man used to slash at his own wrist.

The constable tried to wrestle the blade from Frost and, in the ensuing struggle, was cut in the hand that later had to be stitched at Great Western Hospital. Another officer, PC Spencer, was spat at.

In a victim statement read to the court by prosecutor Timothy Hills, PC Steele said his attacker had been completely reckless and had tied up police resources that were already stretched during the pandemic. “I have no ill feeling towards him, but believe he needs to fully accept responsibility for his actions.”

Matthew Harbinson, defending, said his client had suffered from poor mental health for much of his life. He had been referred to the child and adolescent mental health services when he was 12-years-old.

“When my client was asked to provide some form of judgement in relation to his life he said he could not recall any period of prolonged or sustained happiness since the age of 16,” the solicitor said.

He self-medicated with drugs and alcohol to the point where he was “almost incoherent”. “Mr Frost is not well and he has not been well for a very long time.” However, Mr Harbinson said his client was now starting to set goals for himself.

Jailing Frost for a total of three years, Judge Peter Crabtree described the case as a sad one. However, he said of the attack on PC Steele: “This was an offence against a police constable simply performing his duty during the coronavirus pandemic. He deserves the court’s protection.”

SWINDON is likely to stay in Tier 2 until at least Christmas, the town’s public health chief says. Swindon Advertiser | News …