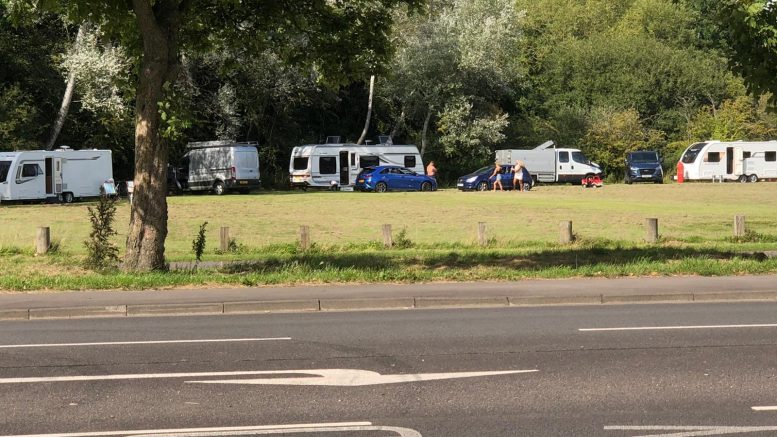 A KINGSHILL man is furious that travellers have been able to set up camp on Wootton Bassett Road recreation ground yet again.

They pitched up with caravans in tow during the weekend after a padlocked barrier was broken.

There have been similar summer incursions at the site dating back at least five years.

John Olding, who has lived in Valleyside in Kingshill for three decades told the Adver he has seen people move onto the field opposite The Runner every year.

The 72-year-old was walking home after shopping on Sunday around 11am when he saw caravans and horses had moved onto the land.

“I’m so angry that it’s happened, the council hasn’t put up the security, they’ve put posts around it but the security needs to be better,” he said.

“I would like to see a height barrier to prevent them from going in.

“They rent out those grounds to the circus and the funfair. If they were scheduled to be there next week then we would have a much bigger problem.

“The grass has been cut recently and it had started to look beautiful over there and these people come along and it’s ruined.”

John reported the same issue in August 2018 when around 10 caravans moved onto the field for a second time that year.

Other people living in the area are also unhappy at the arrival.

He said: “I’ve spoken to my neighbours about it and everyone I speak to is absolutely livid.

“I don’t see why they have to go in there and ruin where kids play. I know when they leave there will be mountains of rubbish there.

“I’m just so angry that the council have allowed it to happen again.”

It’s the third traveller camp the area has seen in recent months.

Caravans appeared a field between Mannington retail park and Redposts Drive in May.

A borough council said officers had carried out welfare checks at the campsite on Monday and the group had told them they would be gone by the weekend.

The spokesman said: “We have given them waste disposal bags to keep the site clear and will continue to monitor the site throughout the week.”

Police are also keeping an eye on the problem.

A Wiltshire Police spokesman said: “We received reports of a group of travellers arriving on the field on Sunday afternoon.

“Officers engaged with them and Swindon Borough Council are aware of the situation.

“We have been carrying out regular patrols in the area and continue to monitor the group while they remain.

“We appreciate the public’s patience while this matter is progressed and would urge anyone to call us on 101 if there is any anti-social behaviour or disorder caused.”