A man brandished a For Sale sign in an argument with two neighbours before going on to stab one of them three times.

Now, Shane Bishop has been jailed for more than two years after he admitted wounding, battery and breaching a suspended sentence imposed after he broke a prison officer’s leg.

Sentencing the 28-year-old to 25 months’ imprisonment at Swindon Crown Court yesterday, Judge Peter Crabtree described Bishop’s record – which included a stint inside for trying to rob a young mum at knifepoint in 2013 – as “quite awful”.

Prosecutor David Maunder told Swindon Crown Court that Bishop had been with his girlfriend in their first floor flat in Beaulieu Close, Toothill, on the evening of May 26, 2020, together with their baby daughter.

They had argued. The woman mistakenly believed her partner had sold or lent her phone to his friend.

The argument spilled out of the flat and into a communal hall in the flats, where they attracted the attention of neighbours.

His girlfriend told him to leave the flat and tried to shut the door on him. They tussled in the doorway and Bishop pulled his girlfriend into the flat by her arm.

Shane Bishop’s custody shot in 2013, when he was jailed for attempted robbery Picture: WILTSHIRE POLICE

Bishop went on to swear at a neighbour who together with his friend chased the defendant out to a bin store. The neighbour was armed with a claw hammer, it was said.

The defendant picked up a For Sale sign and used the wooden pole to fend off the two men. As they backed off Bishop went back to his flat, where he was confronted by the men.

In a basis of plea, Bishop said he had been nervous as the neighbour’s friend had had his hand in his trousers and he feared the man had a knife.

According to the defendant, he and the man had tussled – including on the floor. During the fight he got hold of the knife and stabbed his opponent in the back, left side and through his arm. 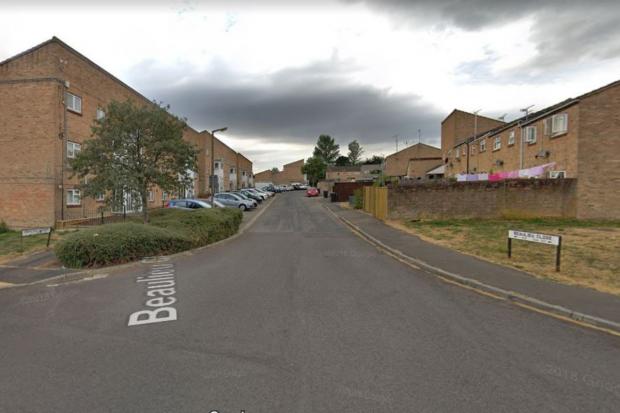 Police arrived at the scene to find Bishop walking away with his partner and their baby. He told officers when he was arrested: “They came to my house with a crowbar and knife and they tried to stab me.”

The victim’s wounds were sutured at Great Western Hospital, with doctors estimating they would heal in seven to 10 days. He had not made a victim impact statement.

Mr Maunder said Bishop had 29 convictions. They included a 45 month prison sentence in 2013 for attempted robbery, when he threatened to stab a young mum and her baby. He was given a 10 month suspended sentence last year for punching a prison guard in 2018.

In mitigation, it was said he suffered from paranoid schizophrenia and had run out of his medication. Since being in custody on remand his mental health had stabilised.

Emma Handslip, defending, said: “What is quite clear is that when his medication is reducing or running out there is a correlation with him feeling very threatened, specifically hearing voices; not telling him to harm people but that he will come to harm.”

He had been victim of a stabbing in 2019, she said, and he had called out police earlier that day to report neighbours banging on his door.

Bishop was said to have had a difficult upbringing, part of which was spent in care. The fact he had not offended between 2018 and 2020 was significant, Ms Handslip added.

Sentencing Bishop to 20 months for the wounding charge and activating five months of the suspended prison sentence to be served consecutively, Judge Crabtree said: “These are wounds that are not serious in the context of a section 20 offensive wounding, but you did use the knife on three occasions. There is a repeated or sustained attack.

“I accept that there was no pre-meditation here and there was an element of excessive self-defence, however, you had control of the knife – a weapon – that was dangerous to say the least; and you used it.”