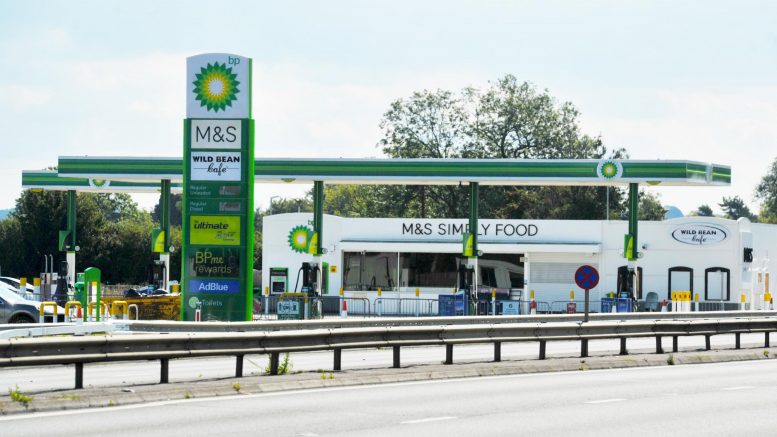 A NEW petrol station on the A419 that has been empty for many months is no closer to being opened.

The BP petrol tanks and Marks and Spencer food shop set up by the southbound carriageway near the Cricklade exit have been in place for almost a year but none of the thousands of vehicles that pass it every day can stop to refuel.

Anyone wishing to top up their tank needs to come off the dual carriageway, turn around and drive back onto it by heading northbound to use the Esso garagedirectly opposite.

Progress the finishing touches for the multi-million pound facility came to a sudden halt after workers realised that one of the slip roads would be built over a major water supply line to Swindon.

Because of this unforeseen issue, a new building proposal with a different location for the exit slip road had to be submitted to and approved by Thames Water and the Highways Agency before work could continue.

Michael Austen bought the Seven Bridges land years ago and allowed BP to build the new petrol station and supermarket.

In February, he told the Adver that the new proposal had indeed been approved and that only four or five weeks of work was needed before motorists could use the garage.

He added at the time: “A start date for this work has not yet been set but I imagine that BP is very keen to get this sorted because of how much has been invested into it.

“I’d like to confirm that I am only the landlord that rents the site and have got nothing to do with the project itself.”

Lockdown came into force a few weeks later and put the project on pause yet again as construction work around the country had to be put on hold for safety reasons.

Work has been allowed to resume but when it will be finished is not yet known. As of yesterday, construction vehicles are at the site and the exit road has been dug up but not yet surfaced.

Mr Austen did not respond when approached for comment about the garage’s current condition. A BP spokesman told the Adver that the situation had not changed since we last reported on the site.

At the time, the oil and gas company’s representative said: “Necessary work is continuing on site and we remain on course to open to our customers later this year.”