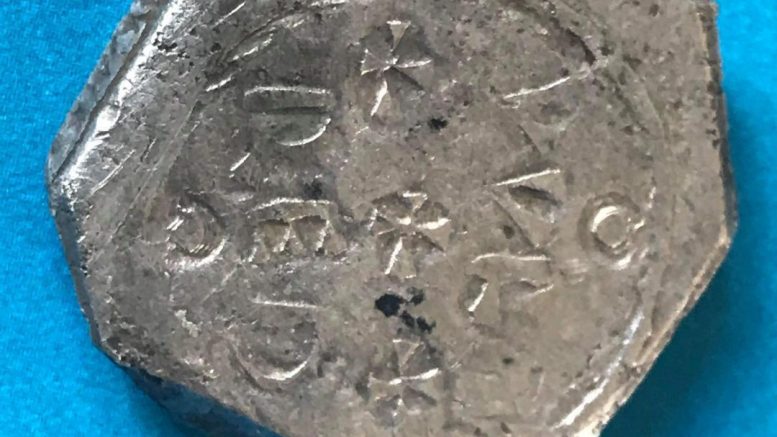 A silver coin found near Swindon may be unique and is being examined by the British Museum.

Detectorist Robin Godwin made the discovery in September 2019 on farmland near Broad Hinton.

During his research beforehand he discovered that a long-disused footpath crossed the land and decided that it might be an interesting place to explore.

And after a few hours of fruitless searching, Robin was thrilled to discover what he immediately recognised as a silver coin.

‘I could tell straight away that it was something different,’ he said.

‘Although I have found coins before, this one seemed older and had an unusual shape.

“The edges of the coin had been crudely cut so that it was more like a rough octagon than round, and it was thicker than most.’

He showed it to other detectorists there on the Rodney Cook Memorial Dig and they agreed that it looked unusual, and was possibly a rare find.

‘None of the others had seen anything quite like it, either,’ said Robin. ‘They were excited about it. I was bowled over by their response.’

On his return home, Robin had the coin’s metal content analysed and found that it is 84 per cent silver.

This, coupled with the fact that it is likely to be more than 300 years old, meant that he was required by law to declare it. He did this via the finds liaison officer in Taunton, at the South West Heritage Trust.

‘They were very excited about it,’ said Robin.

‘Their first thought was that it is a Saxon test piece, though a much lower grade of metal would normally be used for that.’

The other possibility is that it is a piece of Viking silver that the invaders used to try out a King Alfred stamp. ‘Apparently the Vikings loved Saxon coins and tried to mimic them, or they may have just stamped a piece of silver in order to verify it as such.’

As a result of the FLO’s description, the British Museum decided that the coin is treasure and it was sent to them for assessment. They will decide on what it actually is, and also its value.

The British Museum will have the option to keep the piece or, if it doesn’t want it, it will be offered to other museums.

‘If any of the museums want it,’ said Robin, ‘they will have to pay the valuation fee, which will be split between me and the farmer.’

If rejected, or disclaimed, the coin will be returned to Robin.

But he would still be obliged to sell it and split the proceeds with the farmer unless its value is under £1000, in which case he would be allowed to keep it.

‘The British Museum has had the coin for some months now,’ said Robin.

‘It can take up to three years for them to fully investigate a find, as they receive so many. I’m quite excited to hear their verdict but it’s no use being impatient so I’ll just have to wait and see!’

Robin, who lives in North Devon, has strong ties with Wiltshire, having lived in the county for many years while working as manager of a microlight company and at Marlborough College.

He loved hang gliders and microlights and enjoyed flying from the Marlborough Downs.

On moving to Devon in 2009 and taking up metal detecting, he regretted not having detected in Wiltshire.

‘When I heard about the dig, I knew I had to go,’ he said. His emotional ties with the area and its rich Roman and Saxon history combined to make it irresistible.

‘I have a lot of great memories from my time in Wiltshire,’ he said. ‘It seems quite fitting that my best find should be from the area.

“Hopefully the British Museum will confirm it as one of a kind.’