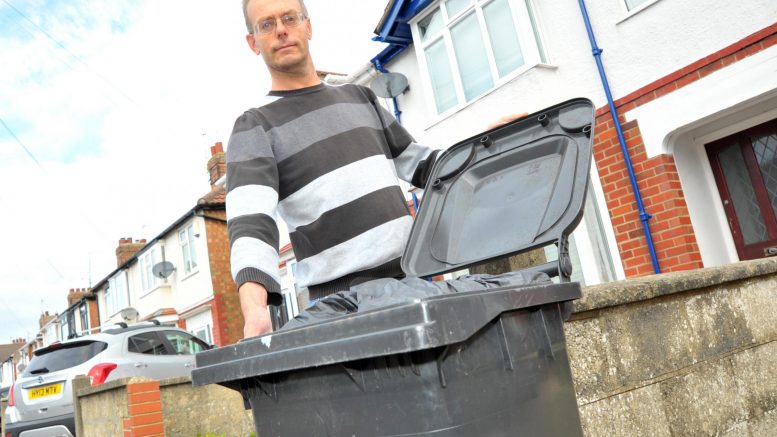 A DAD was left furious after the council refused to collect the rubbish from his second bin.

David Charter claims he ordered it from Swindon Borough Council in 2018 and has not had a problem before.

But the authority says it has no record of authorising the second bin.

David, of Cumberland Road, said: “The binmen left a note telling me it hadn’t been authorised, which is not true because I ordered it from the council myself because one bin wasn’t enough.

“The council suggested leaving my black bin bags by the wheelie bin and they might get picked up.

“This is an environmental health hazard. It’s baffling, I feel frustrated and annoyed.”

His wife Jaz and two of his children – five-year-old Vera and three-year-old Lexi – are severely sight-impaired.

David says this makes it difficult for him to take the time to dispose of the bin bags himself at a recycling centre.

And the next bin collection is not for another two weeks meaning he would have waited a month and even then there’s no guarantee they will be taken.

He told the Adver: “We were told that the situation wasn’t their problem, it was ours and we needed to find a way to deal with it.

“It’s a health and safety concern. We live near some woods so there’s foxes and other animals around and they might tear up the bags and leave rubbish around.

“We do recycle everything we can but some of our children are in nappies so that does create quite a bit of waste. Our two bins are always full.”

A council spokesman said: “We sympathise entirely with Mr Carter’s situation, but most households in the borough are limited to one black wheelie bin.

“This is to encourage residents to minimise the amount of waste they throw away and to encourage them to recycle.

“We do recognise that for some households, particularly those with large families, it may be difficult to rely on a single bin to dispose of their waste and so, in these circumstances, an extra bin may be provided.

“Our records show that at present Mr Carter doesn’t have authorisation for an additional black wheelie bin.

“However, we have arranged for our waste warden team to visit Mr Carter and to assess whether an additional bin is appropriate for his needs.”