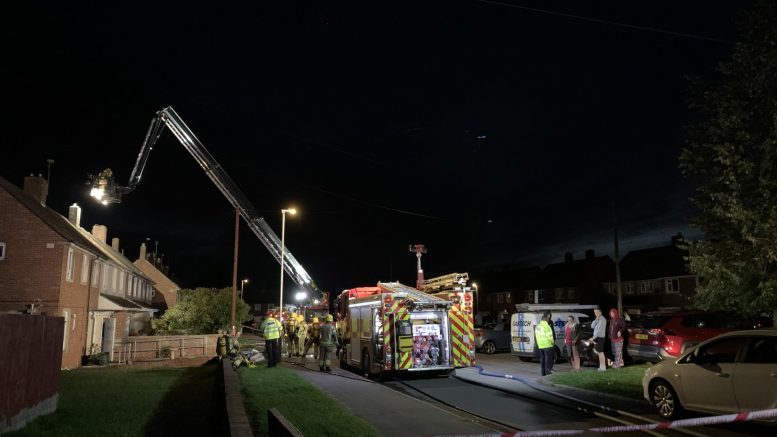 CREWS from five fire stations in the Swindon borough battled a blaze at a house in Pinehurst.

A total of 23 firefighters from Swindon, Stratton, Westlea, Cricklade and Royal Wootton Bassett raced to Cedars Close after receiving a 999 call at 6.29pm on Friday.

Five fire engines and two police vehicles were at the scene initially, then the police left while firefighters battled the plumes of smoke for hours.
Neigbhours were evacuated from their homes as a precaution, with some standing in the street in their pyjamas.

Other neighbours gathered on the green to see what was going on. Some stopped during their evening dog walk to chat and gaze at the unusual sight.

One said the fire happened in the attic and that smoke billowed out through both sides of the roof, which has left three black marks visible on the front-facing side.

An aerial appliance allowed firefighters to access the property’s loft.

At 8.30pm, the aerial appliance was back up and crews were hosing down the back-facing side of the roof.

Reflections of blue flashing lights bounced off windows and a faint smell of smoke lingered in the air.

A witness told the Adver that one person was safely evacuated from the property by firefighters.

A spokeswoman for Dorset and Wiltshire Fire and Rescue Service said: “We had five pumps and the aerial appliance. We used six breathing apparatus, three hose reels and two covering jets.”

No injuries have been recorded by the fire service.

BREAKING; Firefighters from five stations are at Cedars Close in Pinehurst battling a blaze in a loft. pic.twitter.com/1L7wOId5hZ

One last look at the scene. pic.twitter.com/oxg79jlbP4