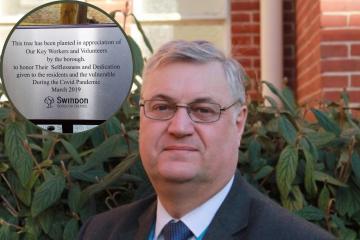 THE leader of Swindon Borough Council has said sorry after a plaque installed to praise the efforts of key workers and volunteers during Covid had spelling and grammar mistakes.

The tribute accompanies a new tulip tree planted in Coate Water and a re-homed tree that had been used in a sculpture for the Queen’s Platinum Jubilee.

Dignitaries from around Swindon and Wiltshire attended the planting ceremony on Monday.

The wording of the plaque raised a few eyebrows as it contained a few errors.

The plaque was planted at STEAM in appreciation of key workers and volunteers that worked on the town’s vaccination programme. (Image: Swindon Labour)

It said: “This tree has been planted in appreciation of Our Key Workers and Volunteers

“During the Covid Pandemic

Swindon Labour praised the intention of the gesture but criticised the council’s leader for a lack of oversight in the creation of the plaque.

Coun David Renard has since told the Adver that the mistakes were noticed before the ceremony, but he wanted to avoid delaying the event rather than wait for a replacement plaque to be ready.

He added: “The Covid pandemic has had a devastating impact on the Country, and here in Swindon.

“Thousands of Key Workers and volunteers in Swindon have risked their lives and given their best to support and serve others in our town.

“It was a privilege to be at the tree planting ceremony as we honoured Her Majesty, the STEAM vaccination centre volunteers, and the unstinting dedication of all our volunteers and key workers, who continue to do such a great job serving our community.

“I offer my sincerest apologies to all the key workers and volunteers that the wording on the plaque had errors on it.

“As soon as it was spotted prior to the event, a replacement was ordered but could not be made in time for the event and we did not want to postpone the dedication.

“We will be forever grateful for the role they played throughout the pandemic, which was why councillors unanimously agreed to create a lasting tribute to mark their service.”

Several Adver readers were unimpressed by the plaque.

One, Marcus Wilkins, said: “Incredible that someone has engraved and mounted this plaque without questioning the spelling and grammar.”

On the other hand, Gareth Moss said: “Doesn’t change the heartfelt message.”