CALLS have been repeated for better safety checks on taxi drivers, as Swindon marks 10 years on from the murder of Sian O’Callaghan.

The 22-year-old office administrator was killed by cab driver Christopher Halliwell after he picked up her fare from outside an Old Town nightclub on March 19, 2011.

In a joint statement issued with personal safety charity the Suzy Lamplugh Trust, Ms Pickford said: “We believe that current taxi and private hire vehicle licensing requirements are not fit for purpose and should be urgently addressed as part of a much-needed push by government to prioritise the safety of women in public spaces and transport.”

Sian O’Callaghan on her 19th birthday

Research carried out three years ago found that some private hire drivers and taxi drivers had managed to obtain or renew their licences despite having serious offences on their records, ranging from battery, causing actual bodily harm and speeding.

Halliwell, who was working for Five Star Taxis on the night of Sian’s disappearance, held a minicab licence from 2000 to 2011 despite having previous burglary convictions.

In February 2019, the government announced it would introduce legislation and “bring forward urgent reforms”.

The Suzy Lamplugh Trust, which advised the government over the proposed reforms, said it was “disappointed” that ministers are now only planning to issue statutory guidance rather than legislation. The Adver has approached the Department of Transport for comment.

Saskia Garner of the Suzy Lamplugh Trust said: “We will continue to lobby the government to introduce legislation, as our research shows that while there are guidelines currently in place to help licensing authorities determine whether drivers pose a risk to passengers and therefore should not be granted a licence, these are often not upheld, are interpreted differently and are not legally enforceable.” 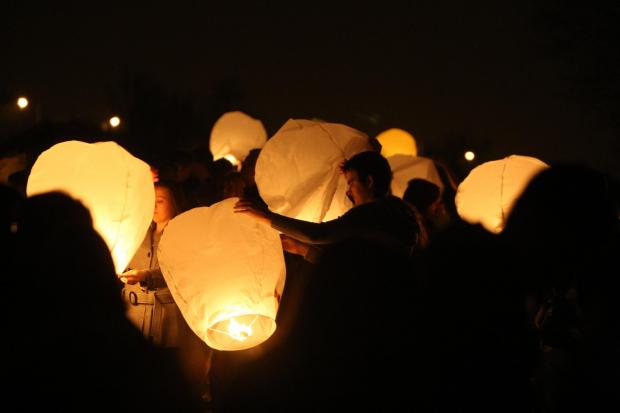 People light Chinese lanterns in Sian’s memory at a tribute event at the Polo Ground in 2011 Picture: ADVER

Ten years ago today, Sian O’Callaghan disappeared while on a night out with friends in Old Town. A huge number of Swindon people supported an extensive police search for the young woman. On March 23, 2011, after police had recovered her body, thousands packed into the Polo Ground to pay tribute to Sian.

Halliwell, who was convicted in 2012 of murdering Sian, is currently serving two life sentences. He was found guilty in 2016 of murdering Swindon woman Becky Godden-Edwards in 2003.

Tributes have been paid to Sian and also her mother Elaine for her campaigning efforts.

Karen Edwards, whose daughter Becky’s remains were found in late March 2011, said she was sure Sian would be “so proud” of what her mother had achieved and said her thoughts were with Sian’s family.

Justin Tomlinson, North Swindon MP, said the town would “always remember” Sian and Becky. He added: “Elaine is one of the strongest women I have met. Her ability to use the most awful experience imaginable to now help others sums up her brave, selfless and incredibly kind nature.

“In Sian’s memory, a lot of good work has been done to increase personal safety, particularly for women, and recent tragic events have shown just how important it is.”

Robert Buckland, Justice Secretary and South Swindon MP, said: “The memory of Halliwell’s victims will live on in the minds of their families and our community. I want to pay tribute to them and their families and recall the immense suffering that they have all been through in order to deliver justice for Sian and Becky.”