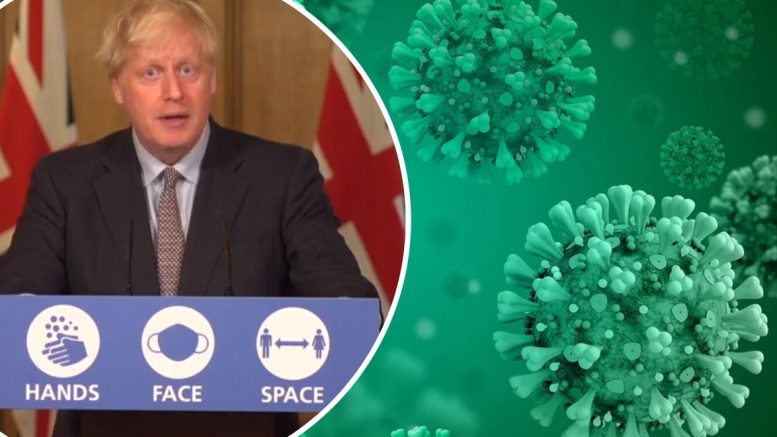 Prime Minister Boris Johnson has unveiled the new set of rules and regulations across England as the government tackles a spike in coronavirus cases.

We’ve put together a round-up of everything you need to know.

The Prime Minister said: “In England from Monday (September 14) we are introducing the rule of six.

“You must not meet socially in groups of more than six.

“And, if you do, you will be breaking the law.”

Where will the rule of six law apply?

Regarding the six people rule, the Prime Minister said: “This will apply in any setting, indoors or outdoors, at home or in the pub.

“The ban will be set out in law and it will be enforced by the police – anyone breaking the rules risks being dispersed, fined and possibly arrested.

“This single measure replaces both the existing ban on gatherings of more than 30 and the current guidance on allowing two households to meet indoors. Now you only need to remember the rule of six.”

Boris Johnson also said he is “sorry” that two whole households will no longer be able to meet if their total exceeds six people.

He said: “This rule of six will of course throw up difficult cases, for example two whole households will no longer be able to meet if they would together exceed the limit of six people and I’m sorry about that, and I wish that we did not have to take this step.

“But as your Prime Minister, I must do what is necessary to stop the spread of the virus and to save lives. And of course we will keep the rule of six under constant review and only keep it in place as long as is necessary.”

Mr Johnson said that he has tasked the Cabinet with increasing enforcement of the rules, adding: “In future, premises where people meet socially will be legally required to request the contact details of a member of every party, record and retain these details for 21 days and provide them to NHS Test and Trace, without delay, when required.”

PM: ‘We are simplifying the rules on social distancing’

On social distancing, Mr Johnson said: “I know that over time the rules have become quite complicated and confusing.

“We are responding, and we are simplifying and strengthening the rules, making them easier for everyone to understand.”

What are the exemptions to the ‘rule of six’?

Boris Johnson added that there will be some exemptions to the “rule of six”.

Mr Johnson said: “There will be some limited exemptions. For example, if a single household or support bubble is larger than six, then obviously they can still gather.”

The following venues can still hold more than six in total:

The PM added: “Within those venues, however, there must not be individual groups larger than six and groups must not mix socially or form larger groups.

“Covid-secure weddings and funerals can go ahead up to a limit of 30 people and organised sport will still be able to proceed.”

Which places will need to provide test and trace information by law?

The PM said social premises and venues, including pubs and restaurants, will be legally required to request test and trace information from customers and keep the details for 21 days.

What about theatres and music venues?

Theatres and sports venues could test all audience members and let in those with a negative result, the Prime Minster said.

At the Downing Street press conference, he added: “Workplaces could be opened up to all those who test negative that morning and allow them to behave in a way that was normal before Covid.

“Those isolating because they are a contact, or quarantining after travelling abroad could, after a period, be tested and released.

“Now that is an ambitious agenda, but we are going to pilot this approach in Salford from next month, with audiences in indoor and outdoor venues.

“And then we hope to go nationwide.”

What about university students?

Prime Minister Boris Johnson said the Department for Education will issue guidance on how universities can remain open to students in a Covid-secure way, as they are told not to send students home in the event of an outbreak.

Speaking at the Downing Street press conference he said: “Opening universities is critical, again, for students’ life chances and, again, the health risks to individuals are low.

“Of course, many university students are in the age bracket where we have seen the infection rates rise recently as Chris (Whitty) was just explaining.

“My message to students is simple – please, for the sake of your education and your parents’ and your grandparents’ health: wash your hands, cover your face, make space, and don’t socially gather in groups of more than six, now and when term starts.

“Today the Department for Education is publishing updated guidance for universities on how they can operate in a Covid-secure way, including a clear request not to send students home in the event of an outbreak, so as to avoid spreading the virus across the country.

“I am very grateful to universities for their continued cooperation and planning for the return of students.”

What about those arriving in the UK from abroad?

Boris Johnson added that Border Force will also step up the enforcement of quarantine rules for travellers into the country.

He said: “Fines will be levied against hospitality venues that fail to ensure that their premises remain Covid-secure.

“We will boost the local enforcement capacity of local authorities by introducing Covid-secure marshals to help ensure social distancing in town and city centres, and by setting up a register of environmental health officers that local authorities can draw upon for support.

“We will simplify the passenger locator form needed for travelling to the UK and take measures to ensure these are completed and checked before departure.

“Border Force will step up enforcement efforts at the border to ensure arrivals are complying with the quarantine rules.”

How many coronavirus tests are being carried out each week?

Prime Minister Boris Johnson said at a Downing Street briefing on the coronavirus situation: “We are processing 1.2 million tests per week.

“We are increasing our testing capacity further to meet rising demand.

“And you can help by only booking a test if you have a fever, a new continuous cough, or you have lost your sense of taste or smell.

“If you don’t have those symptoms and you haven’t been asked to book a test, please don’t.”

What has Professor Chris Whitty said?

The chief medical officer for England, Professor Chris Whitty, has said the numbers of coronavirus case have been increasing “much more rapidly” over the past few days.

He told a Downing Street news conference that while the numbers among older people and children remained “flat”, in other age groups there were “rapid upticks”.

He said among 17 to 18 year-olds and 19 to 21 year-olds the numbers had gone up “really quite steeply” since mid August.

He said that data suggested that without action Britain would be on a path “extremely similar” to France where the numbers had continued to rise.

However in Belgium the authorities took “decisive action” which led to the rates stabilising and then falling.

“This is clear indication that if you act rapidly and decisively there is a good chance of bringing rates back down under control,” he said.