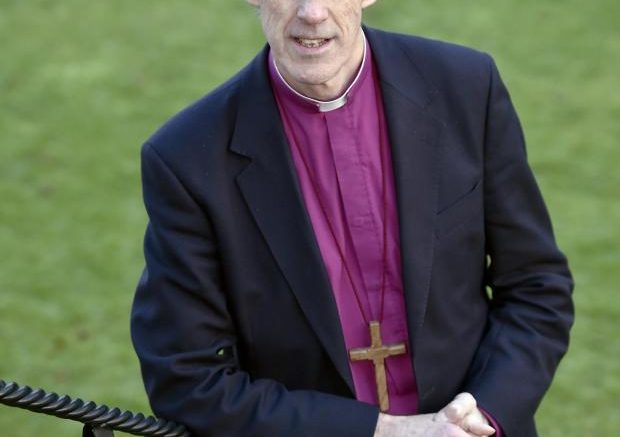 The Bishop of Carlisle is being investigated by the Church of England after he provided a character reference for paedophile priest Robert Bailey.

But last night the Rt Rev James Newcome, who was enthroned as Bishop of Carlisle in 2009, apologised for giving the reference, saying he had since asked for it to be withdrawn.

Rev Bailey, 71, was jailed for eight years and four months last month after he admitted molesting two girls while he was a vicar in Bishops Canning, near Devizes. His abuse was not connected to his work as a priest.

The Wiltshire vicar, who had previously served as an RAF chaplain, as a priest at Cartmel Priory in Cumbria and had been a canon at Carlisle Cathedral, was given a character reference by James Newcome, the Bishop of Carlisle.

That reference was mentioned by Judge Peter Crabtree during the sentencing hearing at Swindon Crown Court last week, although not read out in open court.

Now, it has emerged that the bishop is under investigation by the Church of England for giving that reference.

In a statement, the Church said: “We can confirm that the submission of a character reference for Bailey by the Bishop of Carlisle, James Newcome, and which formed part of a pre-sentence report, is to be investigated further by the Church of England’s National Safeguarding Team, under the House of Bishops’ guidance.”

In a surprise move last night, the bishop said he had asked for the character reference to be withdrawn – and apologised for ever giving it in the first place.

The Rt Rev James Newcome said: “Robert Bailey was a vicar in the Diocese of Carlisle from 1999 until his retirement to Salisbury in 2011 and is someone I have known for 18 years. In April of this year, and at his request, I agreed to provide a character reference to go before the courts.

“On reflection I considered this to have been an error of judgement on my part and asked that the reference be withdrawn.

“I’m truly sorry that the reference was submitted and understand the pain that this will have caused those who suffered as a result of Robert Bailey’s crimes. I offer them my heartfelt apology.”

He said he would co-operate fully with any Church of England investigation.

Last month, Swindon Crown Court heard Bailey had been living in Bishop Cannings when he abused two girls in the 2010s. Both were under-13 when he molested them.

In a statement, read to the court by prosecutor Christopher Stopa, the vicar’s younger victim said of Bailey: “He has ruined my life.”

The girl’s mother read her victim statement to the court, her voice cracking as she said: “This man who’s lived his whole life as a man of God should never be allowed to harm anyone… and no amount of remorse will take away what he’s done.”

The court heard how he had used the older girl’s hand to touch himself sexually on one occasion.

The second, younger girl, who was around nine or 10 when the abuse began, was subjected to more frequent assaults.

He was said to have touched her while they sat on the sofa watching TV and also molested her on the floor of his office.

Bailey told the girls they shouldn’t tell anyone about what had happened, saying he could get into a lot of trouble if anyone found out.

Police found a story on his computer of an older man having sex with young girls, although he denied being the author.

A probation report deemed Bailey to be a high likelihood of reoffending and said he posed a high risk of serious harm to girls.

Bailey’s Permission to Officiate – effectively his licence to continue to practice as a parish priest – was withdrawn by the Diocese of Salisbury in April 2018 when officials became aware of the allegations against him.

A spokesman for the Salisbury diocese said: “No complaints have been received in connection with his ministry in the Diocese of Salisbury, but as a Diocese we hold safeguarding as a highest priority and so if anyone has further information or has been affected by this case, they can contact our Diocesan Safeguarding Advisors in confidence.”